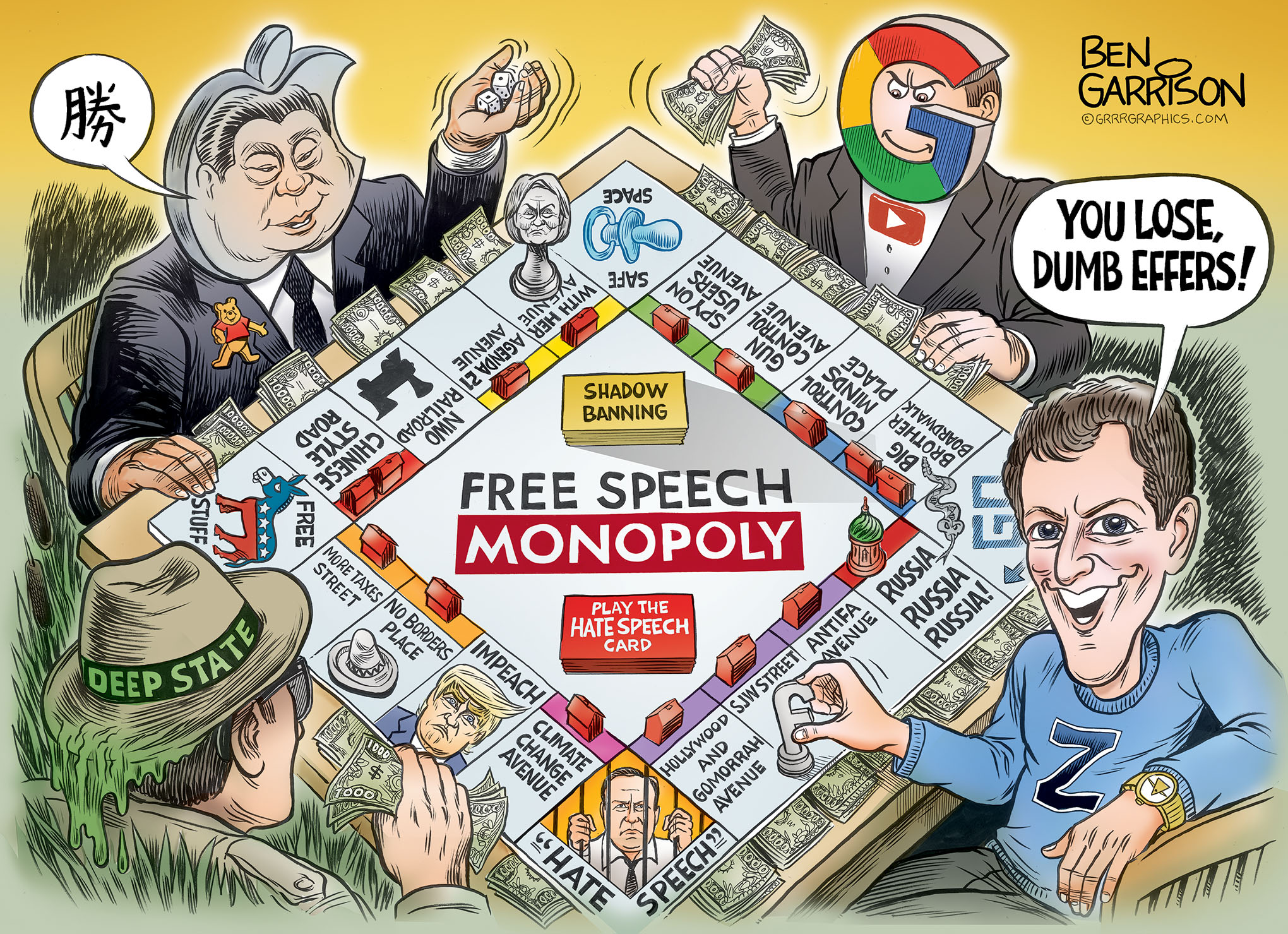 The president claimed that Twitter “made it much more difficult” for people to follow him, removing accounts and slowing the rise of his follower count.

“They have removed many names and greatly slowed the level and speed of increase,” Trump wrote. “They have acknowledged-done NOTHING!”

In June, a recent Twitter purge of accounts lowered Trump’s follower count by hundreds of thousands.

Breitbart News reported that the president’s engagement with his Facebook page had declined by 45 percent after the company tweaked its algorithm. Breitbart

UPDATE December 11th, 2018  Google’s CEO will testify before the House Judiciary Committee on Tuesday where lawmakers will likely grill him on a wide range of issues, including potential political bias on its platforms, its plans for a censored search app in China and its privacy practices. CNBC

How Trump Can Save America, Break Up the Social Media Tech Monopoly!

Monopolies are an economic and political threat

Big monopolies aren’t just an economic threat: They’re a political threat. Because they’re largely free of market constraints, they don’t have to put all their energy into making a better product for less money. Instead, they put a lot of their energy into political manipulation to protect their monopoly.

An industry made up of 500 companies might want government protection, but it’s harder to get them to agree on a lobbying campaign. One made up of three companies, or one, can do so, and be sure that it will reap all the rewards of its effort.

Thus, as Wu notes, “the more concentrated the industry, the more corrupt we can expect the political process to be.”  And as he points out, these fears (and the realities) of huge companies wielding unchecked political power motivated the antitrust crusaders of a century ago every bit as much as concern about prices. USAToday

In early America many cities had ‘town squares’ in which citizens could stand on soapboxes and shout out various messages. Our First Amendment protects such speech.

The Internet is today’s town square. The soapboxes are social media.

The Deep State and the left are intertwined with Silicon Valley. The CIA helped Google and Facebook get started. Why? To make it easier to spy on people. Over time, millions gravitated toward Facebook, YouTube and Twitter. Conservative and Libertarian voices became very strong and that alarmed the Deep State. So they began demonetizing conservatives. Then they shadow-banned them. Now they are deleting them outright.

For many years, Alex Jones reached millions with his journalism and rants. His tirades helped wake people up. He yelled at us about the Deep State, including the corrupt security agencies, the Bohemian Grove, the CFR, the Bilderbergs, fluoride in our water, the lies about 9-11, and yes, even Sandy Hook. The latter had many anomalies that should be questioned. Alex brought all of this up and more before anyone else had a inkling about what was really going on with such matters. He was routinely dismissed as a ‘conspiracy theorist’ by the establishment. However, much of what he has been saying over the years is now acknowledged as self-evident. The legacy media, the Deep State, and Silicon Valley could not stomach the fact that he was informing and influencing minds and elections. They all got together and confiscated his soapbox. Their lame excuse? They claimed he was a purveyor of ‘hate speech.’

Having previously endured years of hate speech aimed toward me, I know what it is and what it isn’t. To me, it’s libel, defamation and death threats. Alex Jones has never engaged in hate speech. Questioning climate change is not hate speech. Jones is not a racist, a bigot or any of the other ‘phobic’ names the left enjoy pinning on ideological opponents. ‘Hate speech’ sounds alarming and terrible, but it’s also vague. Who gets to decide what it is? The Supreme Court ruled it was legal speech, but apparently the Silicon Valley and Deep State commissars want to overrule that decision. They own their social media game and they’ve rigged it in their favor. They have all the money in the world, so they can afford to lose revenue from the millions of conservatives and libertarians they’re forcing out of the game. They can’t win the argument, so they’re resorting to censorship.

Censorship is what China does, and companies like Facebook and Apple are eager to please the communist oligarchs. The Deep State wants what President Xi enjoys—a rigged Internet that does not allow dissent or criticism of the political elite. Right now, even Winnie the Pooh is being banned in China. Why? Because Xi opponents in China were using the cartoon bear as a ‘meme’ to criticize their leader. Remember, conservatives greatly out-memed the left during the last presidential election. Hillary is no doubt very angry that we have the ability to meme and ridicule her pomposity. She once said herself that the Internet needs an ‘editor.’ She would welcome a Chinese-style, well-censored Internet that she and her ilk would control.

The leftist media have dominated American minds for decades. The lies they told were readily accepted as facts. That kind of mind control is no longer working for them, thanks to the Internet. We know their ‘Russia collusion’ narrative is bunk. We’re not going along, so now they want to force us to go along and if we don’t, we get banned as ‘haters.’

It will get worse. PayPal is already banning users who are being smeared as ‘haters.’ The left will make that tactic seem fashionable, so it’s a matter of time before banks get in on the act. Maybe even the Bezos-owned Amazon?

What can we do? Many think conservatives should develop their own social media. That is no easy task and we will receive no generous funding from the Deep State to do it. What we should NOT do is ask government to ‘regulate’ social media. That would only add bureaucracy and regulations on free speech and if the left regains political control, they will use it to their advantage. Just like they used the IRS to harass conservatives.

The only thing we can do now is keep our cool and let the leftist oligarchs play their game and reveal themselves for who they are—tyrants who want control over our minds via their game of monopoly.

Support Weaponized Cartoons in the fight against censorship by Big Tech Brother! Click to Donate today