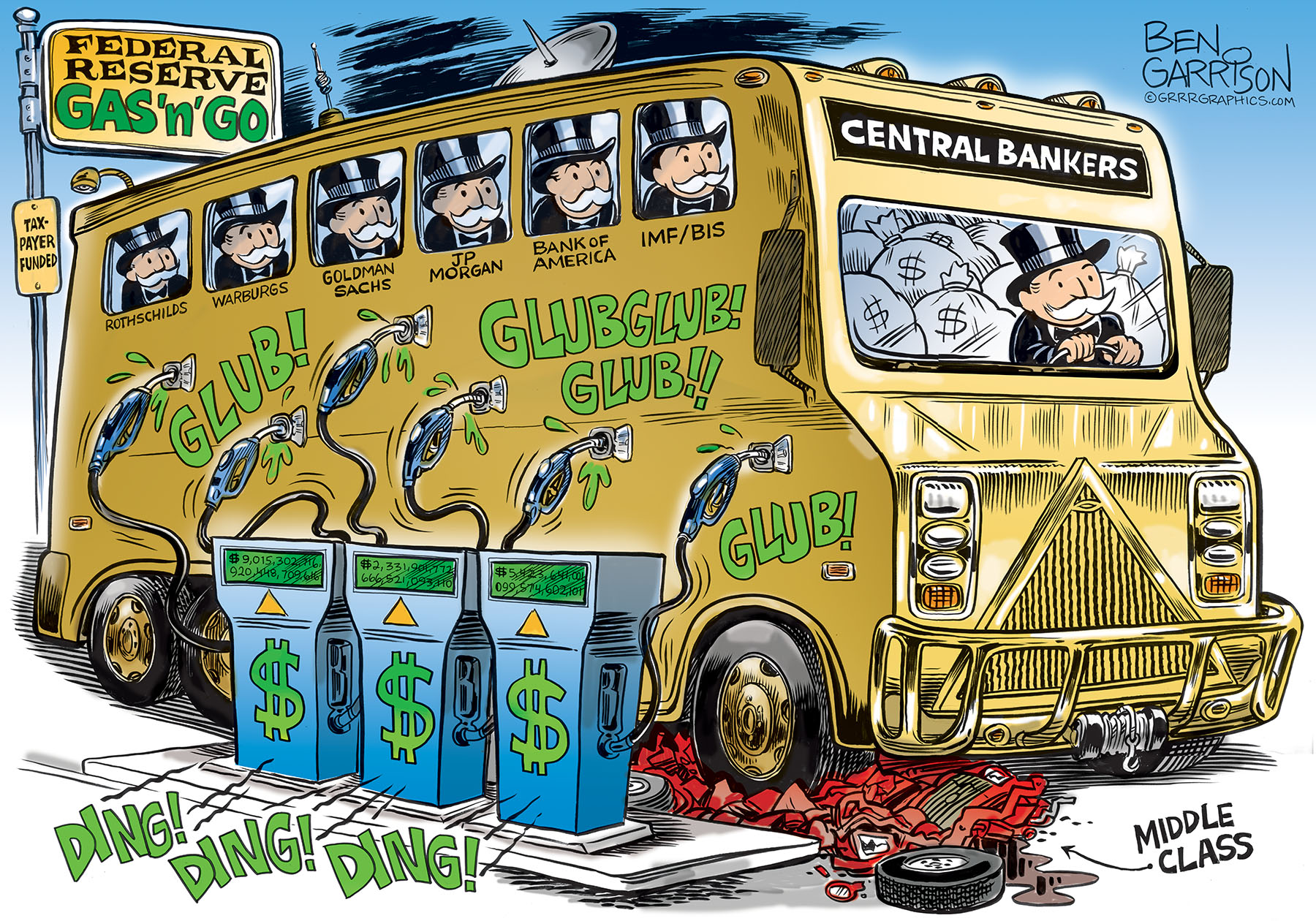 The Fed is set to lower their interest rate by another 25 basis points Wednesday, following two similar cuts.

They are doing this ostensibly to stave off a recession. We’re not allowed to have those any more. There won’t be bear market for the Dow, either. After all, the 1 percent, including the central bankers, own most of the stocks. It doesn’t matter that the valuations for many stocks have eclipsed all reason and sanity; the top of the pyramid must have more.

Besides, stocks going down might signal a recession. Can’t have that, so fresh money is constantly applied in the form of Quantitative Easing. The average Joe never sees any of this money. He’s the one who picks up the tab.

Oh sure, you might hear how the QEs ended years ago, but that’s not true. They never ended—they just don’t bother to tell us the truth any longer. Why should they? They are in charge, not Congress.

The Federal Reserve has a printing press and during their latest liquidity ‘crisis’ they created billions of dollars daily for member banks, which must be perpetually up-propped. The easy and guaranteed cash encourages them to make bad loans and gamble the money away on risky ventures and derivative schemes–but no worries. They have a big safety net called the Federal Reserve. Therefore the debt can gets kicked down the road to infinity. Their bubbles never pop—they only get bigger. They keep their profits while socializing their losses.

It’s an immoral system of debt money. The consequences are inflation and higher taxes, which hurt all of us who don’t have access to the printing press. To be sure, the Federal Reserve doesn’t really need our taxes. They can create debt currency at the flip of a switch—a book entry on a computer. No, the IRS is there to keep us living in fear. It’s also about draining hard-earned money from workers so they can’t spend it on themselves and their families. The removal of such cash helps the Fed keep inflation more in control. Funny how they create inflation and then punish paycheck earners for inflation! The IRS gets to know all about the Fed’s citizen slaves. People can be sent to prison for trying to hide anything. Yet the Fed can hide all they want. They remain unaudited. The Fed spends trillions of dollars to bail out needy international banks and We The People are not allowed to know how much and to whom. We can’t even know how much if any gold remains at Fort Knox. The gold supposedly belongs to the people, but we’re not allowed to know!

The Central Bankers and their vile creation, the Federal Reserve, own our politicians. They own the courts. Notice when you go to court you’ll see the American flag in gold fringe. That means ‘Admiralty Law,’ or global corporate law—not our Constitution. We are part of the globalist corporate system, not the Constitutional common law system. That’s why our names on birth certificates are in all caps. We are ushered into the world as already being owned by the central bankers. We are born to serve them. Our God-given rights are ignored. We are their slaves and when we’ve outlived our usefulness we’re encouraged to die before we can get anything back. They do this by feeding us fluoride, GMO foods, corn syrup and junk foods to make us fat as well as all sorts of cancer-causing material in endless vaccines (soon to become mandatory). They also use their destructive cultural Marxism, which teaches us that human beings are meaningless blobs of matter. That makes the idea of abortion easier to take—as well as eugenics. Their planet must be protected from us, hence the malarkey known as ‘climate change.’ They want us to feel guilty for breathing and existing!

Evil is firmly in control and guess what? The evil doers want more. More money and more power. They won’t be stopped and nobody seems able or willing to stop them. One of the few real journalists out there, Julian Assange, is in prison and under torture for heroically revealing to the world what kind of Satanic people are running this sorry show on Earth.