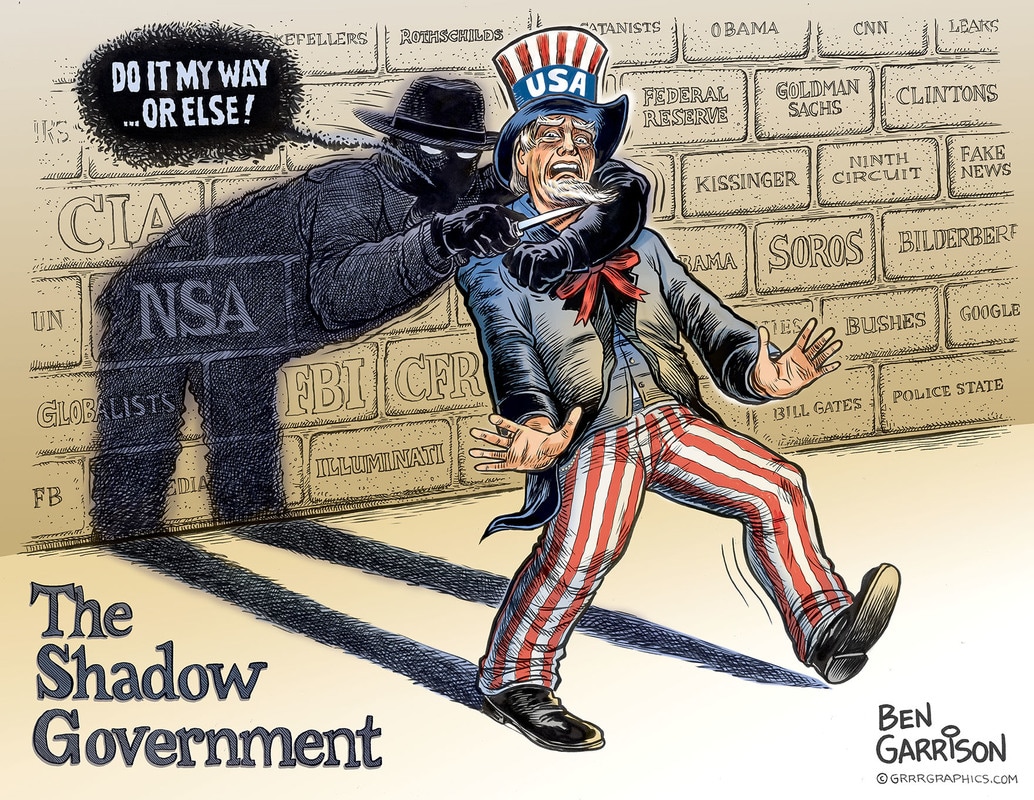 The Shadow Government or the Deep State

The Shadow has been forced into view. It’s not a pretty sight. President Trump has the wheel and the shadow government can’t stand it.

The American people thought they had the say, but it was all an illusion. The Shadow has run things since President Kennedy. Their star chambers mattered–not the voting booths.

Trump is not owned by the Shadow, and it appears he wants to keep his campaign promises, which will be the equivalent of throwing a giant monkey wrench into the globalists’ gears. The Shadow doesn’t want the swamp drained. Therefore, his minions are doing their best to stop him by loudly repeating a big whopper: They say Russia and Trump somehow ‘hacked’ the presidential election.

What really happened is Hillary Clinton received payola from Russia, and in return she allowed them to control 20 percent of our uranium reserves. The legacy press is not interested in that story, though. They take marching orders from the Shadow, whose script is repeated by the far left media and Hollywood. Unencumbered by facts and reality, the corporate legacy media can spew lies endlessly. Then they had the gall to express outrage because Trump didn’t take them seriously at his press conference.

Since Trump didn’t agree with their assertions (lies) they claim he’s out to end freedom of the press. That’s a howler. The press stopped being free a long time ago. They do as they’re told by the Shadow. Instead of investigating Hillary’s long list of crimes, which probably includes ‘pizzagate’ activity, they instead steadily thump the negative drums of anti-Trumpism. More and more citizens no longer want to listen. People are catching on and are tuning out the Shadow’s propaganda.

Eisenhower warned us about the Shadow government, also known as the ‘deep state.’ The Shadow called the shots and rigged the game in its favor for far too long. The Shadow considered voters to be suckers who would believe any lie they were told—whether it be The Warren Commission Report or The Gulf of Tonkin fantasy. They voted for Tweedle D or Tweedle R and the Shadow won regardless. Thankfully, we got the Internet. People are now able to circumvent the propaganda arms and find the truth. As a result, we have a populist, nationalist president who wants to do what the citizens want. The Shadow knows this, hence its desperation. The Shadow is capable of doing whatever it takes, including treason, to stop Trump.

We must remain vigilant.