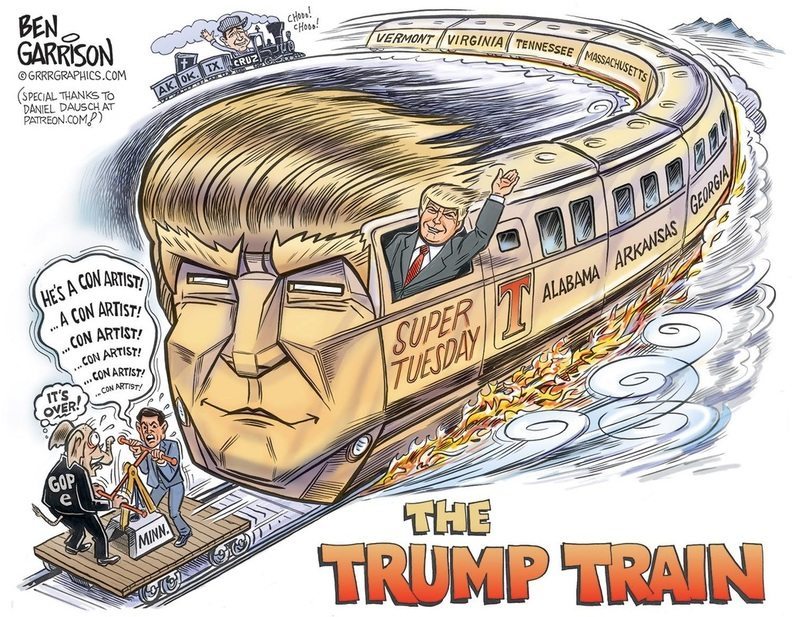 Trump won as predicted and at first it looked like he might sweep all the states except Texas, which is Cruz’s home state. Cruz actually took Oklahoma too, as well as Alaska. Rubio won his first primary—Minnesota.

Rubio sure does like to repeat himself. I heard him call Trump a ‘con man’ at least a dozen times Tuesday night. Trump may be saying the populist things people want to hear. Is he sincere? I guess we’ll find out once he’s elected. However, we do know that con men already populate both parties. HIllary Clinton in particular has a lot of experience with tricking people. She and her rapist husband are both grifters who will lie through their teeth to gain power and money. During her victory speech she croaked that we all need to be more ‘kind and loving.’ Sure, Hillary. Is that how you acted when you yelled at secret service men to ‘pick up your f___ing bags?’ Was it kindness that made you torment your hubbie’s female victims? Was it love that let prompted you to let people die in Benghazi? Was leaving a murdered Vince Foster in a park an act of love on your part? Was it kind of you to accuse an innocent and devoted man of graft so you could move your own people into the travel office? (Travelgate). It amazes me how Hillary manages to find adoring voters. Don’t people even research this woman?

I get a lot of good ideas for cartoons and many unfortunately go un-drawn because I don’t have enough time. I decided to draw this one. The ‘Trump Train’ has the momentum after Super Tuesday.