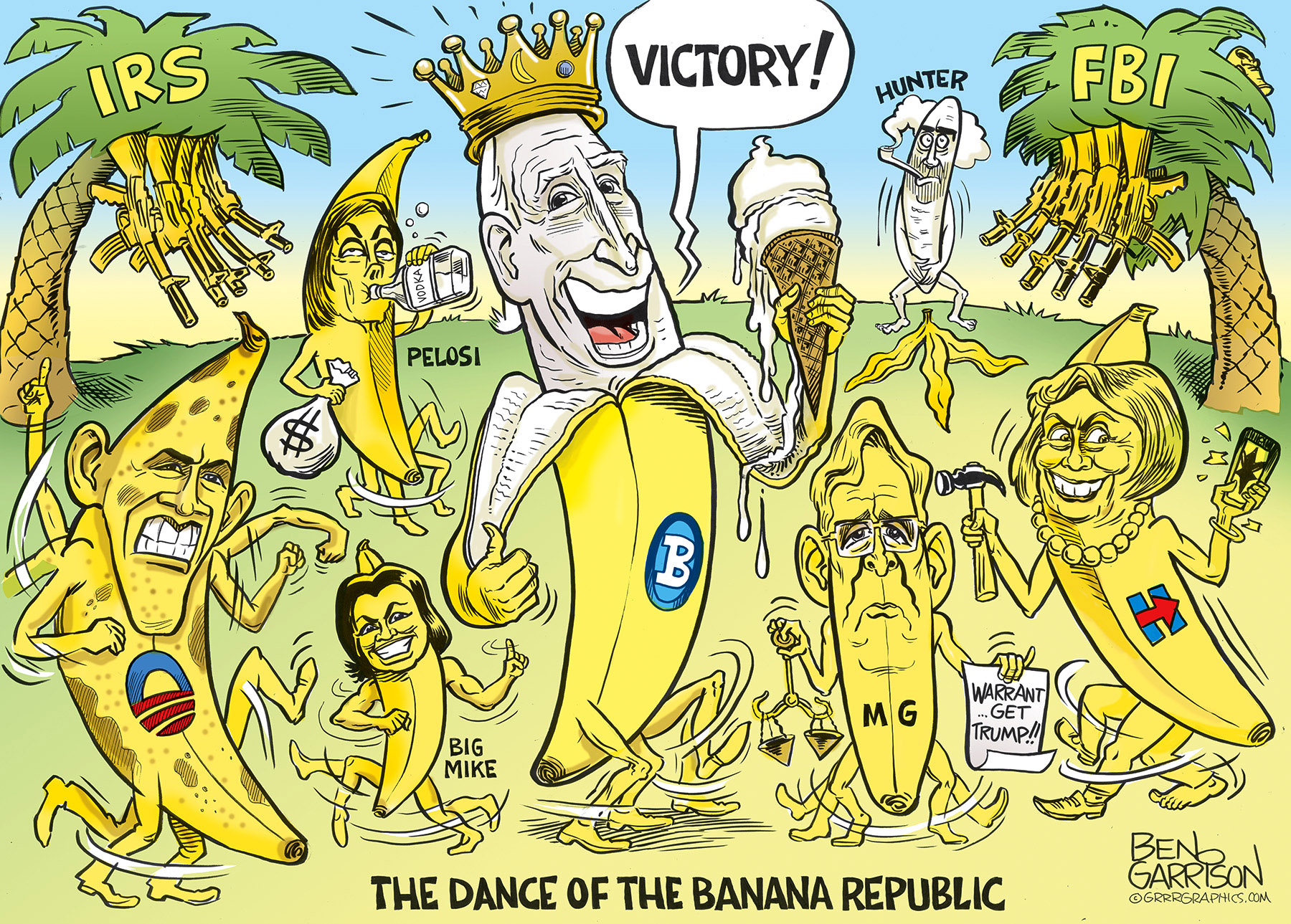 The Country Has Gone Bananas

Benjamin Franklin told us we had a Republic—if we could keep it. We couldn’t keep it. It has been slipping away for a long time and now it’s official: We’re a failed state.

The Marxist Democrats, led by Barack Obama, are using the tactics of third-world dictatorships. Barry promised to fundamentally transform America.

He succeeded. He transformed us from a Republic to a Banana Republic.

The Democrats use a corrupt and politicized FBI as muscle. Their legacy media is used to propagandize and brainwash citizens. Elections are stolen. The Democrats want to be a ‘perma-party.’ The Republicans have way too many RINOs willing to assist them. Their opponents are slandered and broken economically by the Marxist Democrats’ ‘lawfare.’ One former CIA chief, Michael Hayden, even called for President Trump’s execution. Democrats can commit the most egregious crimes and nothing happens. Republicans get show trials and sudden arrests over the most trivial matters. They have been handcuffed, strip-searched, and intimidated by brute force. Joe Biden and his son Hunter commit crimes and nothing happens. (Although Hunter might enjoy getting strip searched).

Welcome to the Banana Republic, USA. Our’s is a country where those not in line with Marxists Democrats are harassed and impugned as ‘traitors.’ Trump supporters who rightfully protested the obvious presidential election theft are called ‘insurrectionists.’ Now they are afraid to their right to assemble—they might get arrested and tossed into a gulag! Democrats who harass and threaten Supreme Court justices are called patriots. Nothing happens to them. There is no equal justice.

The Democrats are above the law.

The Banana Republic’s goal is to convert our country into a globalist state, run by UN bureaucrats and the WEF billionaire class. This is want Obama meant by the word ’transformation.’ Soon we will have 87,000 armed IRS agents knocking on and perhaps knocking down the doors of Trump supporters. The IRS already operates on fear, but now that fear will be greatly magnified. It’s a life or death situation. People are already intimidated by audits. After all, we’re guilty unless we can prove our innocence. It’s no easy task for the poor and middle class to fight back against the IRS. They can’t afford tax lawyers and accountants. Making Trump supporters broke is the real goal behind the ramped-up audits. Lois Lerner ran the IRS under Obama and she targets conservative organizations. People were outraged, but Lerner was protected. The Swamp never prosecutes itself. Her success has only emboldened the Marxist Democrats to abuse their power even more.

Our freedoms have been forcibly exchanged for ‘safety,’ ‘inclusion,’ and ‘sustainability.’ Inflation combined with the IRS will convert many into impoverished slaves. We will be forced to depend on the Deep State Swamp ruling class. They’ll take care of us like the ChiComs take care of Chinese citizens. That is, we will live in fear and have no rights. We won’t be eating bananas, either—we will be eating bugs.

Head banana Joe Biden has already been taking victory laps. He says there is no inflation! If that’s the case, why pass a wasteful anti-inflation bill? It’s because they have access to a money printing press, and boy do they love spending money It’s a means whereby the Banana Republic tyrants steal from the powerless through inflation while giving it to themselves, their allies, and those at the top of the pyramid. Most citizens will go broke. After all, we have no printing press of our own.

We’re being led by sociopaths. One of them is a corrupt, lying, senile career politician who pretends to be the top banana. In actuality, he’s a mere figurehead. Don’t be surprised when he’s installed once again in 2024.

After all, our country has gone bananas.