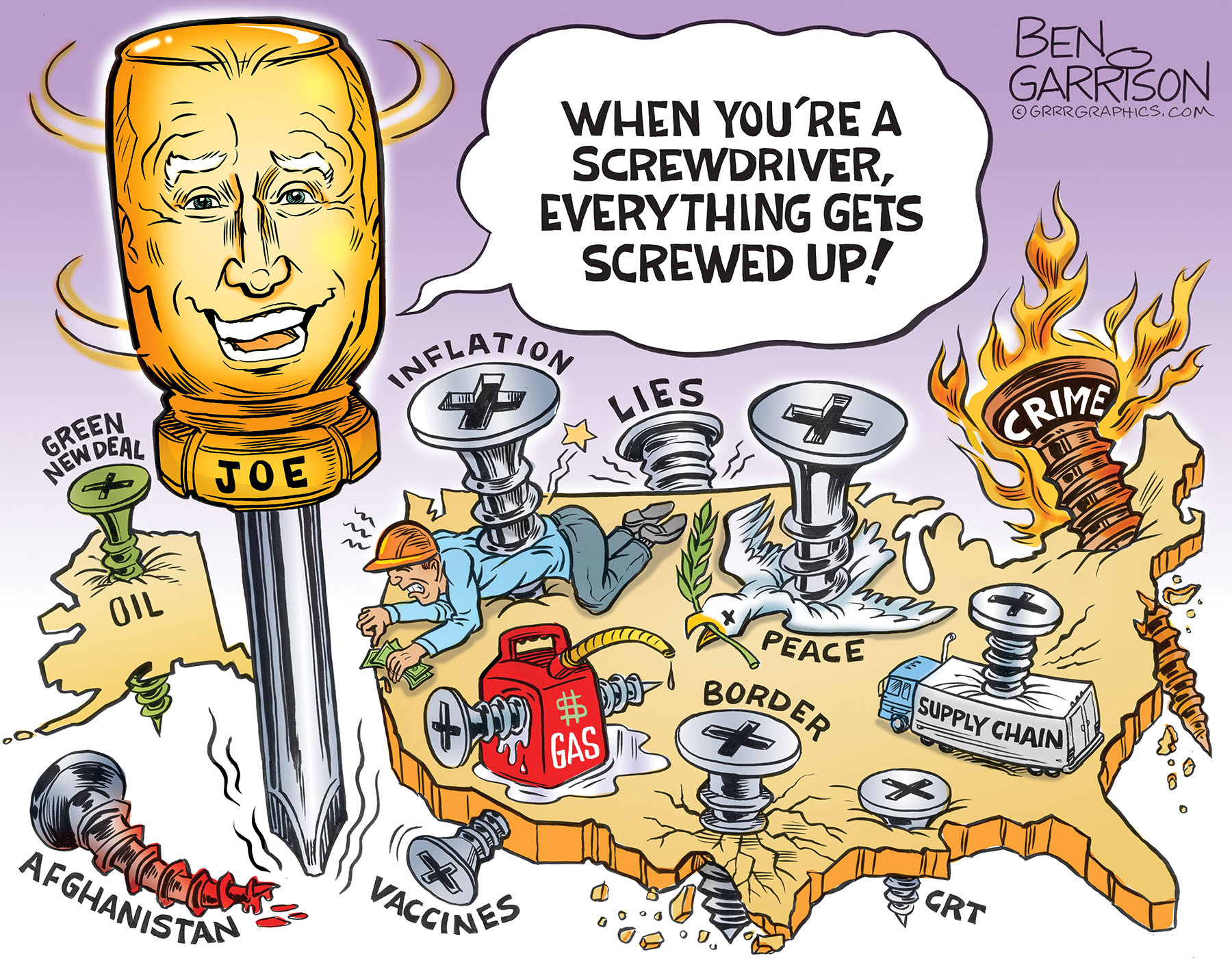 There is an old saying: “If all you have is a hammer, everything looks like a nail.”

Joe Biden is a screwdriver and his job is to screw up America intentionally. To be sure, we know it’s Joe’s handlers turning the screws, but the end result is the destruction of America.

This is what Obama was working on during his disastrous presidency. He said he wanted to “fundamentally transform America.” Why would he want to do that? Because he hated America. He and his real father in Hawaii, Frank Marshall Davis, wanted to see America destroyed in order to usher in Marxism. Davis was Obama’s ‘mentor.’ Barry was a red-diaper baby who grew up to become a Manchurian candidate of sorts. Hillary was supposed to win and complete the destruction.

Trump thwarted their plans and began making America great again, much to the dismay of the Democrats. That’s why they cheated and installed Biden. They know Sleepy Joe is good at screwing things up, and he has…big time. America is getting screwed by Joe Biden and his handlers. Gas prices are incredibly high. Joe blames Putin, but in reality he likes high gas prices—he wants Americans to stop driving cars with internal combustion engines. Inflation is through the roof and is eating up paychecks of the poor and middle class as well as harming those with fixed incomes. Biden blames Putin. His strategy in Afghanistan was an unmitigated disaster. Joe wanted it that way. The Chinese collected US weapons left behind and Biden got to pay back the Chicom benefactors who shoveled millions of dollars into his pockets and into the pockets of Hunter.

Joe and his ilk love war. The Democrats sent $40 billion to Ukraine, a corrupt country and money laundering center. Joe wants to keep the corruption going, even at the risk of nuclear war. Joe pushed dangerous and ineffective vaccines that caused millions of injuries and deaths. Joe pushes critical race theory and LGBQT+ nonsense. Joe encourages confused children to get gender surgery without the permission of parents.

With every twist and turn, Joe demonstrates that he is a complete screw up, and he has over two more years to do even more damage.

Can our Republic survive Biden and the Marxist Democrats?

The Truth will come out and the Republic will hold.

Why take us up on this offer? Look, we know times are tough with skyrocketing gas prices, inflated rent prices, and the cost of food doubling or even tripling. Yet the message and awareness you offer to your fellow Americans is priceless.

This is why we urge you to invest in these cartoons during these times of corruption, chaos, and communistic thorns pressing into the great soul of America. Your purchase fuels the MAGA movement, patriotism, and the awareness of your rights. Our great 2nd Amendment is in the spotlight of decimation–let’s not let that happen. Order your “cartoon ammo” today to fight back against The Deep State, The Swamp, and Globalism. Thank you! 🙂