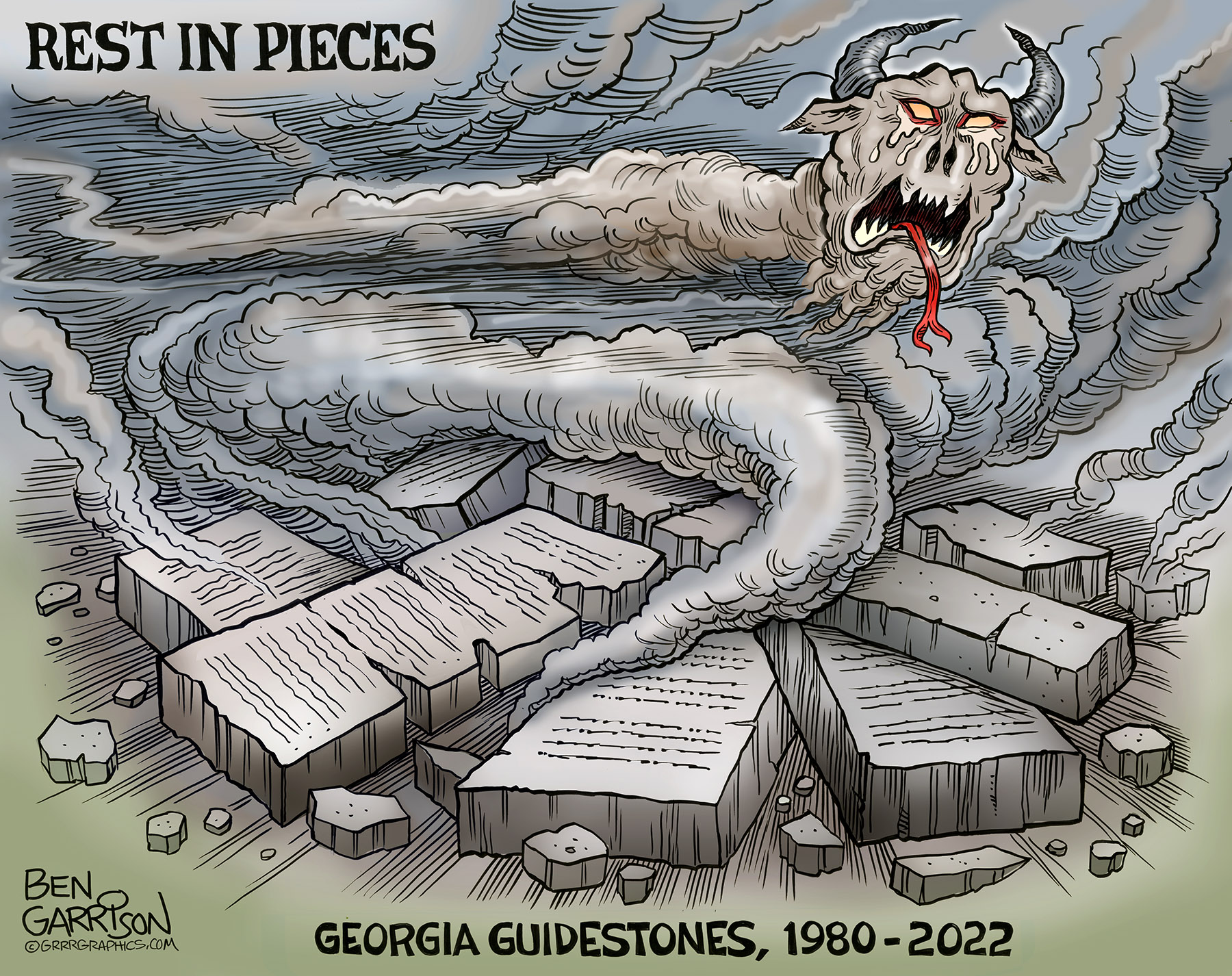 the Devil went down to Georgia..

The Georgia Guidestones are no more. Someone blew them up. Or maybe it was a bolt of lightning from the hand of God. Many will say it’s a shame that the ’stones are gone. After all, they were private property and some say the inscriptions on the giant stone slabs proffered good advice meant to help improve the human race.

Others say the inscriptions were meant to inform everyone on Earth about the plans the globalists had for them. Satan likes to tell people how he’s going to victimize them. That way, it becomes the fault of victim for not doing anything about it. By not resisting the Devil, humans become complicit. Whatever happens to us becomes our fault. The Guidestones were unveiled in 1980, but nobody knows who funded them. The front man used a phony name, but many think he was in league with Dominant Men at the top of the pyramid. Their plans for humanity were disguised as wise advice, but in reality those Dominant Men wanted to usher in high tech tyranny for all of us. We’re seeing it happen right now.

The 10 inscriptions were in plain sight and in multiple languages. The Guidestones weren’t meant only for Americans. The inscriptions were for the entire world. I will give my brief opinion following each ‘guide’ statement

How are they going to get humanity (now over 7.75 billion) down to 500 million? We know Bill Gates plans on doing it through vaccines. It will be combined with food shortages. We see the Dominant Men are already limiting farming, fertilizer, and water, but they are also blowing up food processing plants as well as destroying the supply chain. People are not going to voluntarily check into disintegration chambers, so they will instead be killed methodically and it will be painful. The Dominant Men get to decide what ‘balance with nature’ means, and it’s their nature to be ruthless.• Guide reproduction wisely — improving fitness and diversity.

This is the language of eugenics. Improving fitness? That was the reason given by many who wanted to euthanize the retarded or castrate criminals. The spirit of Hitler is alive and well among the Dominant Men who run the world. It’s also why they encourage loud screeching by those who support abortion and now even infanticide.

This is very sinister. They don’t want nationalism or people who are proud of their own language. Words have to be controlled by the Dominant Men. Their new language will also be greatly dumbed down with far fewer words than most languages. In Orwell’s ‘1984,’ words were eliminated or combined in order to dumb down and control thought among the populace. A limited language and censorship are what the Dominant Men desire. People are much easier to control when thought and expression are reduced.• Rule passion — faith — tradition — and all things with tempered reason.

This is code for doing away with religion and Christianity in particular. You’re not supposed to be passionate about God. You must be tempered by the Dominant Men who say ’science’ trumps all things and naturally they are the ones who get to decide what science is. • Protect people and nations with fair laws and just courts.

This is more vague, but rest assured the Dominant Men who want to rule us will decide what’s fair. They will write the laws. They will control people under the guise of ‘protecting’ them. In reality, the people will be brutalized.• Let all nations rule internally resolving external disputes in a world court.

Who will run that ‘world court?’ Why, the Dominant Men ruling the world. Of course!

We’ve already seen this happening by means of defunding the police. The dominant men enjoy seeing common citizens getting victimized by crime. They don’t like us fighting back. They like what Biden is doing by ignoring our border laws. A river of drugs and crime pour into the country daily and Biden does nothing because he considers our border guards to be ‘useless officials.’• Balance personal rights with social duties.

The Dominant Men want individual liberty removed and replaced with ’the common good.’ They get to decide what the ‘good’ is. We’re seeing them push for gun control and that will eventually lead to the elimination of the Second Amendment. We’re already hearing how it’s our social duty to give up our guns. Only the Dominant Men will be allowed to have firearms. They consider that ‘balance.’

The Dominant Men will tell us what truth is. They will say an ugly man who wants to be a beautiful woman IS a beautiful woman and if you disagree, you’re in trouble. ’Seeking harmony with the infinite’ sounds like so much New Age psychobabble that was popular around 1980. It can mean anything the Dominant Men want it to mean. • Be not a cancer on the Earth — Leave room for nature — Leave room for nature.

“Leave room for nature” is stated twice. I don’t know why, but humans being ‘a cancer’ is a dead giveaway. The Dominant Men consider us to be a cancer on THEIR planet that they own and control. They want us removed. Agenda 21 and 30 are good evidence of their plans and they’re implementing them right now.

With the destruction of the Guidestones, The New World Order was dealt a small blow. Let’s hope the Dominant Men are good and mad. I hope they are.

Cartoon available as a signed print, click to view