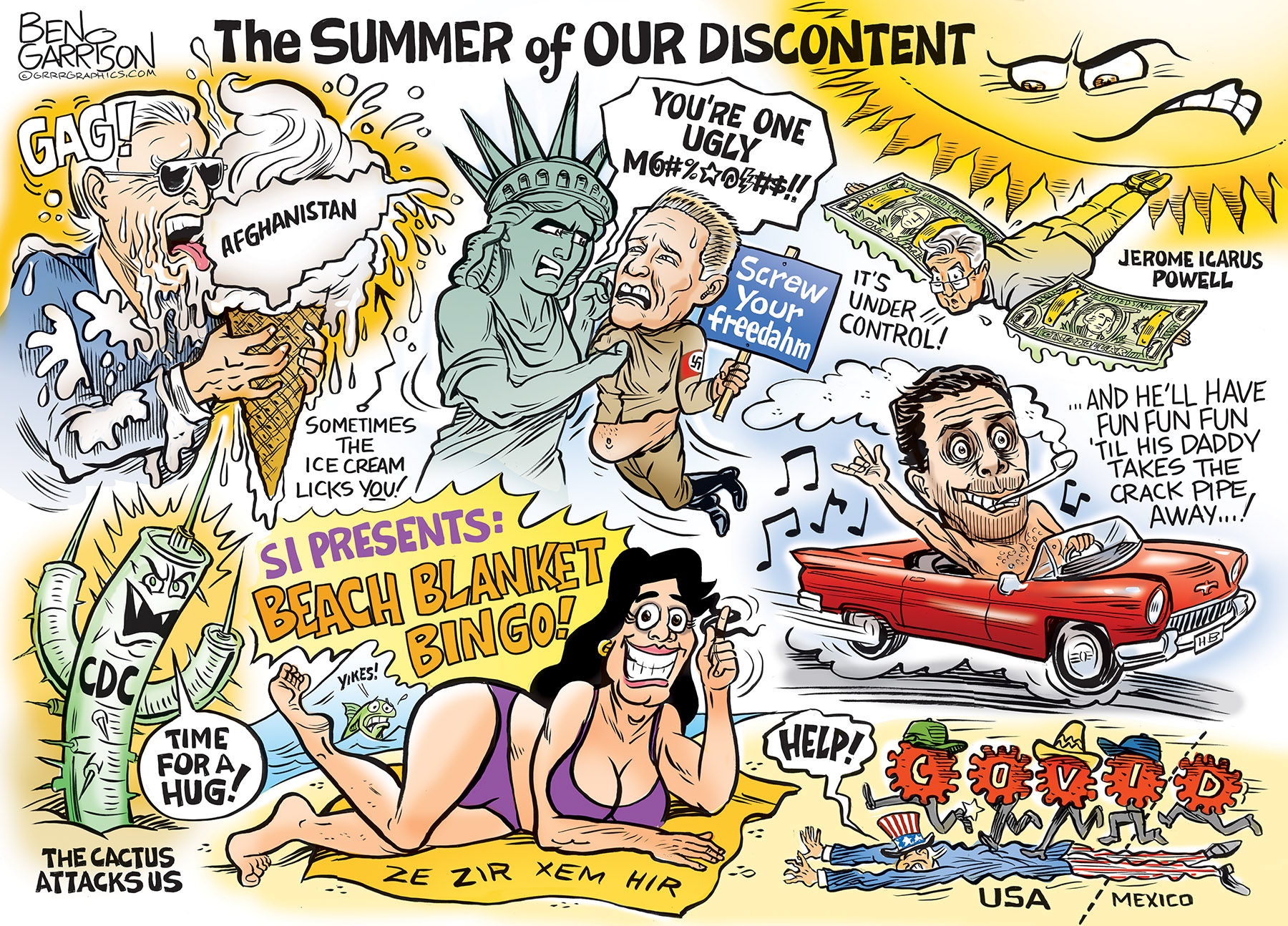 The Dog DAZE of Summer

Many Americans are experiencing a deepening discontent as the long hot summer drags on.

The Federal Reserve continues to print the dollar to infinity in order to maintain the expansion of the market bubble. Most of the stocks are owned by the top 1 percent, so the rich at the top of the pyramid are getting richer while the middle class is going away—they pay the price in terms of inflation. One wonders if Powell is intentionally melting the dollar’s value in order to usher in a new totalitarian digital currency and social credit system.

READY TO FIGHT ABACK AGAINST HARD LEFT? JOIN US ON SUBSCRIBESTAR- AN EASY WAY TO SUPPORT CARTOONS WITH A SMALL MONTHLY DONATION. PLUS SEE NEW CARTOONS FIRST BEFORE PUBLIC RELEASE! THANK YOU FOR YOUR AMAZING SUPPORT! CLICK TO VIEW SUBSCRIBESTAR

One of the worst discontents has been the war in Afghanistan. It has lasted way too many summers. Nearly 20 of them. America has lost its longest war, but the military industrial complex remains a clear winner. They have raked in trillions of dollars from the taxpayers while heroic Americans were killed and maimed in a war that should never have been fought. The blame lies with the Bush and Obama administrations. $88 billion alone was spent to train Afghan troops, but now they’re collapsing like a house of cards in the face of a relentless Taliban advance while Biden licks his ice cream and wanders in circles.

Let’s face it, the Afghan people WANT to live under a medieval religion that prevents their girls from going to school. The Bush family in particular are war criminals. After all, Building 7 falling in its own footprint proves it was all a set up to steal American freedom and begin wars a half planet away in order to waste lives, time, and money. The Vietnam lesson was not learned and so now we also have the Afghanistan lesson.

The scamdemic continues to drag on. I warned everyone that the mask wearing and vaccines would never go away and they haven’t.

Americans are getting banned due to posting so-called ‘misinformation’ on social media while Fauci, the CDC, the WHO and the globalists spew outright lies. Biden wants us all to get dangerous, experimental injections against a virus that has a 99.7 percent survivability rate. At the same time, the demented pedophile in chief leaves our southern border wide open to COVID infected invaders. His crack-addicted son rakes in a billion bucks in graft from the CCP, who cooked up the virus as a bioweapon in the first place. Nothing is done about the open corruption.

The Swamp protects their own.

Finally, we had Arnold Schwarzenegger flex his ugly opinion right in the face of Americans. The USA has been mighty good to ‘Ahhnold.’ His mediocre acting talent has been handsomely rewarded because he has more muscles than brains. Due to his stardom, he was even made a governor for a while, but now he has stabbed America in the back when he said, “Screw your freedom!”

One might think he’s reverting to ancestral roots. His dad betrayed Austria by becoming a Nazi. In the case of Arnold, the rotten apple didn’t fall far from the tree.

There’s a lot more to be discontented about, but I can only put so much into one cartoon.