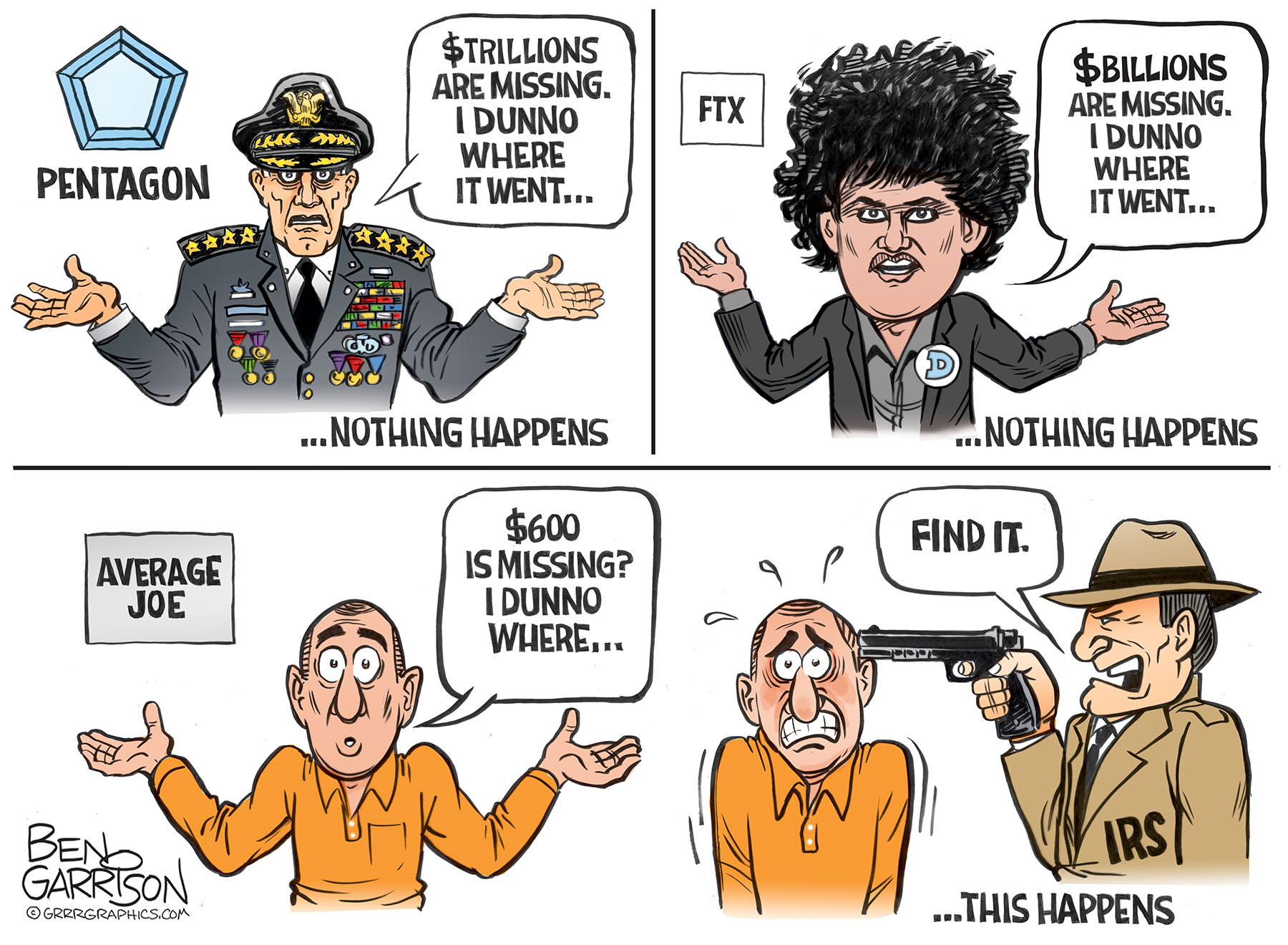 Those 87,000 IRS agents won’t be going after the Pentagon…

He and the Democrat-controlled Congress backed the “American Rescue Plan Act.” With a name like that you know for sure it’s about screwing those who are struggling and powerless.

To make ends meet due to Covid and massive inflation, many common folk in the middle class were forced to come up with ‘side hustles’ to make ends meet. With the new $600 rule, they must now report such income to the IRS or face stiff fines. Biden must be licking his ice-cream soaked chops just thinking about the paperwork pain he’s inflicting on average Americans. He knows big corporations have a plethora of loopholes to avoid taxes. They have teams of CPAs and tax lawyers to defeat the IRS. The average person can’t afford such resources and so they are easily fleeced.

It’s the common people who always pay. The Pentagon ‘loses’ trillions of dollars? Well, these things happen. No problem. They get a pass. Sam Bankman-Fried commits record-breaking fraud and somehow he avoids apprehension and instead enjoys applause. That’s probably because he gave so much money to rich and powerful Democrats. The average Joe is the one who gets the shaft. Not just from the IRS, but from lawyers, hospitals, bankers, car dealers, and especially politicians.

Of course we know Biden is a doddering criminal and fool who does as he’s told. He’s a manikin who dances according to rhythmically pulled globalist strings. He’s very well-hated, which means he’ll probably be reelected in 2024. The ruling class loves to rub it in our faces. it’s one of the reasons they’re hiring 87,000 well-armed tax agents. That will be an Orwellian boot to our faces. We are already taxed at every turn, but now we’ll have to do even more paper work to figure out how to pay our hard-earned dollars to a thoroughly corrupt system. The national debt is already unplayable, and even by targeting the poor and middle class, the revenue gleaned will do little to address the leviathan budget deficit.

Still, it’s not about the money. It’s about control. They WANT us to get frustrated by the massive and mind-bogglingly complex tax code and the endless forms. The ruling elite will then come to the rescue and tell us they will alleviate all that aggravation if only we accept being chained to their new digital currency—the CBDC.

If that is adopted, it will be game over. We’ll all be turned into slaves. Every transaction will be tracked, monitored, and taxed. We’ll be told what we can buy and not buy. A social credit system will control our behavior. America will become a dystopian hell scape. It will mark the beginning of a new Dark Age.

The Bring Back Trump Signed Print Bundle Two prints at an amazing price!