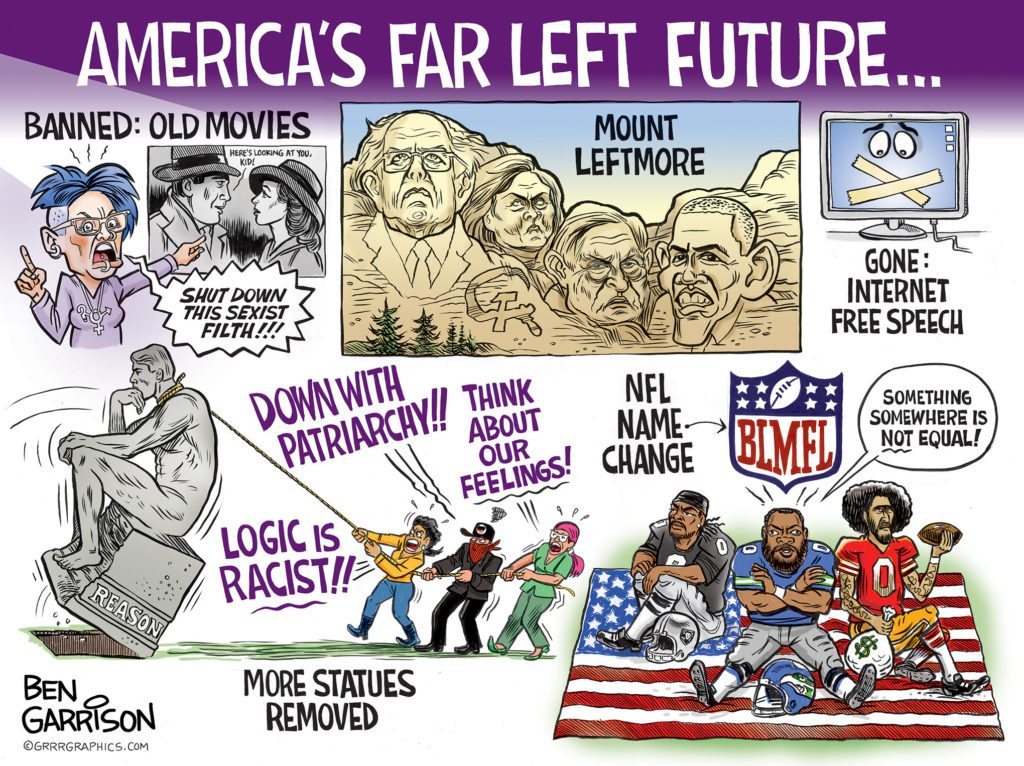 The divide between the left and right is widening in America. Instead of rational debate, we’re seeing more vitriol and trench digging. The mainstream media and the left want President Trump impeached. Their bogus ‘Russia’ narrative has unravelled, so now they’re calling Trump’s supporters ‘Nazis’ or ‘white supremacists.’ This is nothing but hysteria and completely ludicrous, but I’ve experienced similar attacks for years. I’m a libertarian cartoonist, but many on the left seem to think that makes me a ‘Nazi.’ No—we libertarians despise socialism in any form!

In order to bring down our president, the left seems willing to bring down the entire country including erasing our history. Statues of confederate heroes are being pulled down with increasing alacrity. Why? Because someone’s feelings may be hurt! Bill Maher said on a recent show that ‘feelings’ are reason enough to remove statues that have stood for well over 100 years. This kind of destruction to our heritage won’t end with the Confederate legacy being removed. Statues of our founding fathers as well as explorers will be next. Maybe even Rodin’s “Thinker” will be toppled. After all, he represents European logic and reason. They’ll want to tear up the Constitution eventually and replace it with “Das Kapital” or something. There has even been serious lefty talk about blowing up Mount Rushmore. America’s very history is being insulted. This makes it easier for the left to install socialism.

Old movies will no longer be available. They aren’t politically correct and they don’t want young Americans to see what our country used to be like. You know, with men and women who weren’t confused about their gender.

Conservatives will no longer have a voice on the Internet. This is already happening. We must fight this, but I’m not sure how. My site and blog could disappear tomorrow and I’d have no recourse. Obama was determined to give the Internet over the UN. That way a ‘global’ authority could stop free speech like they have in Germany. That will happen here if the lefties get their way.

The NFL is starting a new season soon and protestors are upset that Colin Kaepernick has not been signed! They claim the NFL is racist even though 70 percent of the players are black. They want Colin in there so he can do more protesting.

The over-paid QB’s ability declined after failing to win a Super Bowl. He became a mediocre player and was benched. What did he do? He decided to sit during our National Anthem. This trend has caught on and the pink-ribbon festooned NFL apparently endorses such behavior. Something wrong with society? Take it out on the symbol that unifies and represents ALL Americans.

Sure, they have freedom of speech and expression, but what would happen to the average worker if he or she did something that distracting and insulting on company time? Nowadays, anyone expressing anything slightly politically incorrect in the workplace can get canned.

Diversity and “inclusion” are now sacred words at HR departments everywhere. Anyone violating a long list of ‘no-can-say’ things could lose their job. Not so in the NFL. The league and the players enjoy raking in millions of dollars for playing a game while the NFL let’s them disrespect our flag.

The league itself pays no federal taxes, but their hard working fans would be harassed by the IRS in short order if they didn’t pay theirs. The NFL can officially be considered in the lefty PC camp. The game will continue to be tamed to the point where the refs may toss flags for overt displays of toughness or masculinity. The only way for the fans to protest is to stop paying for and watching the games.