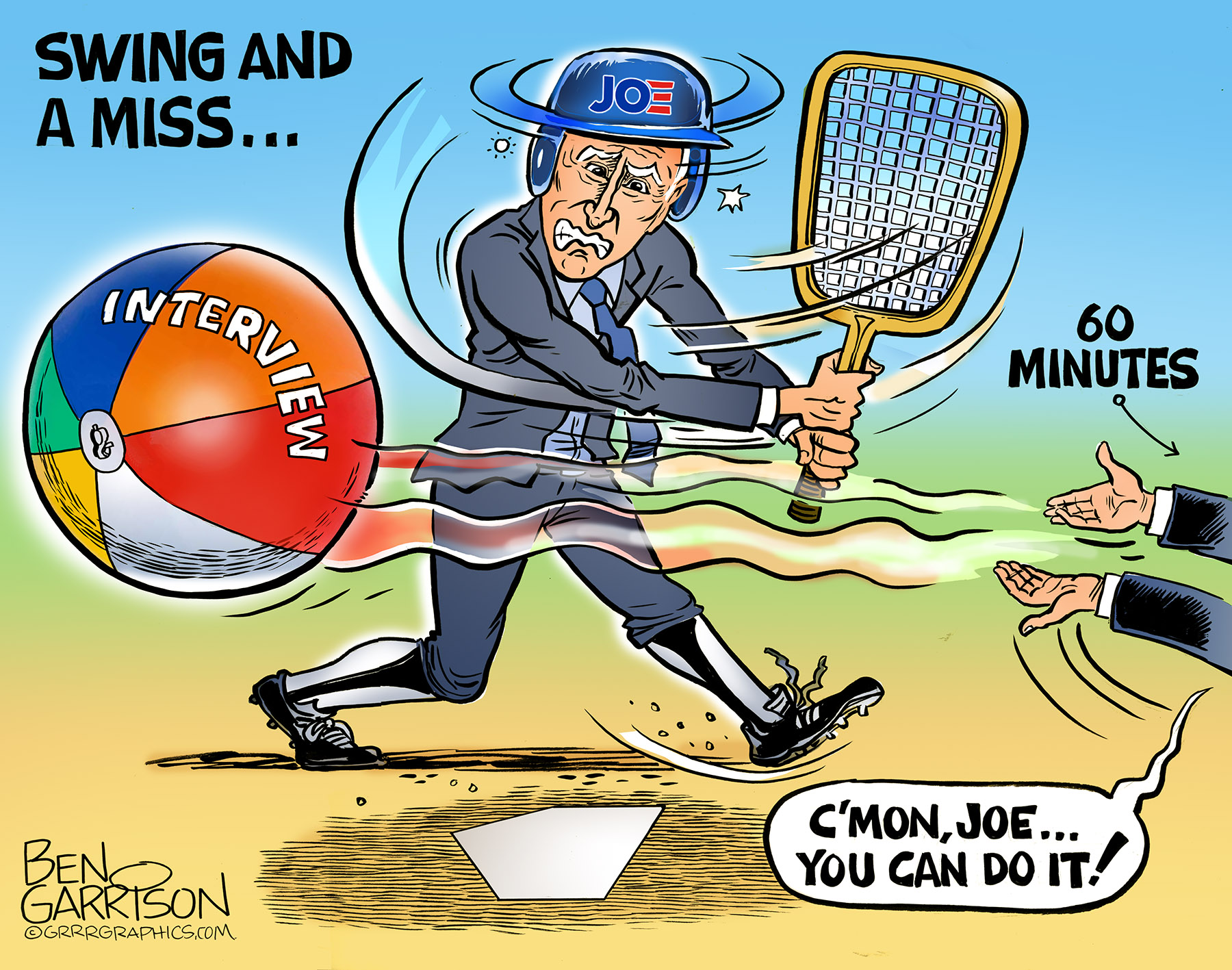 Joe Biden’s interview with “60 Minutes” was pre-taped and edited. They made it easy for him and yet he still struck out.

Here’s a man who talked about sending American troops to defend Taiwan if mainland China invades it, while the ‘official’ White House position is non-committal. How does Joe not know this? Blinking Biden must have had the questions in advance, but he still bumbled his way through the answers anyway. Will he bumble America into another war? How can he be so irresponsible? Oh, now I remember. That was Biden’s line about Trump for having declassified documents at Mar-a-Lago.

Hypocrisy never stings the bewildered Biden. He never takes responsibility. He lies his way out instead.

Or he will say non-sequitur and odd things. For example, he spouted an archaic reference about “The proof of the pudding’s in the eating.” At first I thought Biden was saying ‘eat me’ to the American public. Don’t be surprised if he does say that very thing down the road. After all, he already condemned Republican voters as being dangerous fascists.

If your life is too busy to be on social media all the time, make it easy on yourself! Subscribe to our GRRRNews newsletter and get new cartoons (and special offers!) direct to your inbox- it’s quick- it’s fast- it’s free! Sign up today

He certainly doesn’t seem to care about inflation and how it is destroying the American working class. He insisted it was under control because over a month’s time it didn’t increase as much. However it’s still at 8.3%. Under Trump, despite his own voluminous spending, it was at 1.4%. Joe also talked about job creation. People returning from lockdowns to their regular jobs is not job creation. The government cannot create—it can only destroy. Joe’s 87,000 new IRS agents will be well armed and ready to destroy small businesses and private sector jobs.

It’s Go Time! Are you ready to help save our Republic? Support our fight with ULTRA MAGA cartoons that put progressive Commies in a tizzy- Join Ben and Tina on SubscribeStar- a monthly donation at any level will help keep Ben drawing! Click here and make a difference with “Sustainable cartoons” today! 😉

Joe doesn’t have to think before he talks. He took his beady eyes off the ball a long time ago. He’s a figurehead only. His string pullers are the ones who are quickly and intentionally destroying what’s left of our Constitutional Republic. The climate change crisis bunk is particularly destructive, but then there are the open borders with Chinese-made drugs pouring in, rampant homelessness and crime, inflation, and medical tyranny. On the horizon is digital currency, a social credit system, and slavery to a socialist, globalist, government that wants everyone controlled on a granular level.

Everyone knows Biden is a demented liar. There’s no real reason to have him around in public view. He can’t remember what happens after his noon pudding cup and lets others handle things. Why perpetuate the charade through useless interviews and public appearances?

He needs to stay on permanent vacation at his walled beach house in Delaware. Preferably in his basement.

Thank you for the support- we draw for you. If you would like to help us with a donation please click here Your support keeps GrrrGraphics online!

Christmas is around the corner- Here’s a great gift for the ULTRA MAGA Patriot- The OMG Book Bundle- order yours today!